Feels like just yesterday I was flying out on my first overseas adventure to meet up with P and C on the Emerald Isle! After watching Bobby Flay’s Food Network Special on Ireland, I couldn’t wait to taste the dishes from “one of the world’s new superpowers when it comes to food”. I was also curious (and a bit anxious) how I’d get on with my allergy in a country that admittedly loves it’s butter =D I mean, I had a lot of stuff I wanted to do in Ireland… 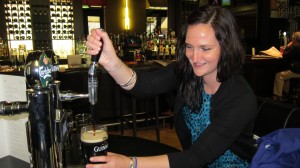 There was no time for being sick haha! I visited a lot of restaurants, but want to highlight my top 3 picks. First up was The Half Door Restaurant in Dingle, Kerry. I had the Sautéd Mushrooms with Brandy & (Irish) Bacon Sauce as a starter…

and the Cromane mussels garlic & white wine sauce. All of the items on the menu were made to order so they had no problems modifying for me.

Next up (after quite a long drive, P is such a trooper and tremendous tour guide 😉 was the Trattoria Restaurant in Galway. I had the Penne Gamberetti e Courgette. Of course I had to ask what both those words meant (prawns and zucchini =) The homemade pasta was outstanding!

Last but certainly not least was a visit to Cafe Paradiso in Cork City. This was one of the places Bobby Flay stopped at during his tour and I was dying to go! The restaurant is strictly vegetarian but has an amazing variety of food and types of cuisine. C and I got the Gingered Sweet Potato Springroll with Coconut-Chilli Dip and Sesame Mizuna Salad…

and the Paradiso Chips with Rosemary Truffled Aioli to share.

And I got the Potato, Caramelised Onion & Lovage Tortilla on Wilted Greens with Braised Puy Lentils, Rosemary Aioli and Sweet & Hot Pepper Jam. I said they have an amazing variety of food… and they do… you should check out the menu. Only after the 3rd dish came out did I realize I just ordered loads of potatoes. But hey, when in Rome… er… Ireland! Everything at Cafe Paradiso was made to order as well. The waitress said they could have modified anything on the menu for me, but advised which dishes would still retain the best flavor which I found really helpful! Bonus points for her. 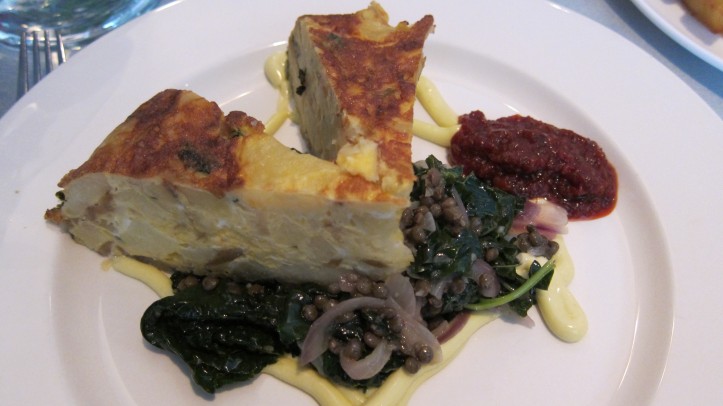 All of the restaurants I visited were really accommodating and if Ireland will have me back, I would visit again in a heartbeat.