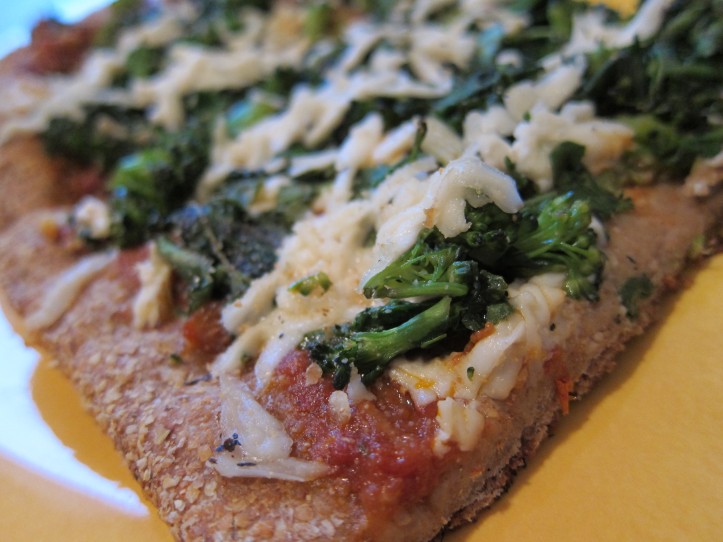 For those of you who don’t know me personally, I run when I haven’t done a ridiculous thing to injure myself sometimes. As a true running nerd I have Runner’s World sent to my inbox everyday. Recently they had a post on building a better pizza, since we all (runners) apparently eat at least one a month (yep a whole one). With some extra sauce saved from the other day’s meatballs I thought ‘Hey why not?’. There were 6 categories on how to improve a pizza’s nutritional qualities.

Preheat oven to 450F and place rack in the lowest position. Spray a large baking sheet with cooking spray. Roll out dough on a surface sprinkled with the wheat germ (I usually just do it in the pan to create less mess, but then the extra germ burns… you win some you lose some). Transfer dough to baking sheet and bake until lightly crisp, 8-10 min.

While the dough is firming up, heat a large frying pan over medium heat. Cook broccoli in the water for 3 min or until tender. Stir in arugula and cook until slightly wilted, 1-2 min.

Once dough is ready, spread sauce evenly over crust. Sprinkle half of the cheese over the dough. Distribute broccoli/arugula mixture. Top with remaining cheese. Season with salt, pepper, garlic, onions or whatever else comes to mind. Bake until crust is golden and cheese is melted, 10 min.