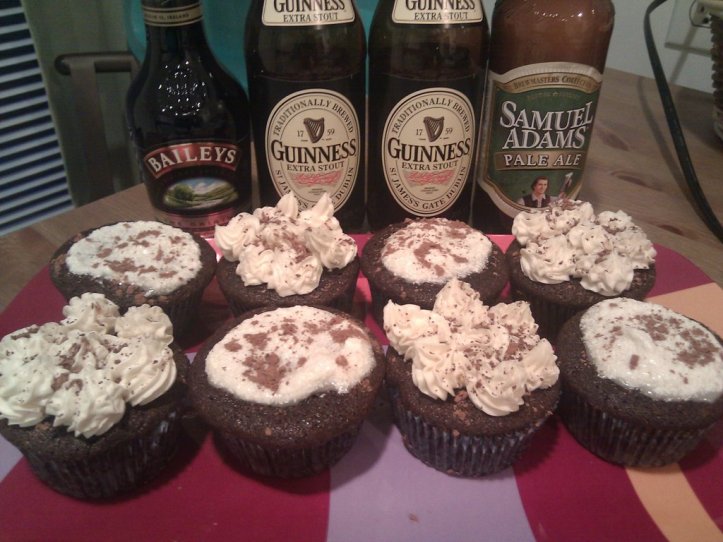 These are some of my favorite cupcakes to make. Top 5 definitely. My buddy G was throwing a farewell party and specifically requested that I bring a batch. How could I refuse! The cakes are modeled after a “Black and Tan”, typically a drink made from a pale ale and a dark stout. Hello Sam Adams and Guinness! Half of them are frosted with an ale glaze and the other half with a Bailey’s buttercream.
Yields 48 cupcakes.

Bring Guinness and butter to simmer in a heavy large saucepan over medium heat. Remove from heat and whisk in 1 1/2 cups cocoa powder until smooth. Let cool slightly.

Whisk flour, baking soda, and salt in a large bowl. Beat eggs and sour cream together in another large bowl. Add in sugar and beat until fluffy. Alternate adding Guinness/chocolate mixture and dry ingredients until completely combined. Fill cups 2/3’s full and bake 25 minutes or until tester comes out clean.

For the Pale Ale Glaze beat butter and shortening until fluffy. Add in sugar, vanilla, and ale. Beat until well combined. If the frosting looks normal, you haven’t added in enough beer! It should look bubbly and almost separating. Sounds weird, but it tastes so much better this way… trust me =)

For the Bailey’s Buttercream follow the same steps as above. Since Bailey’s isn’t carbonated this will look like normal frosting. Beat for about 5 minutes to make sure it’s nice and fluffy.

Like I mentioned above, half of the cupcakes were glazed and half were frosted. They both taste amazing… well… so I hear since I can’t have Bailey’s haha. After frosting or glazing, sprinkle remaining cocoa powder on top for decoration.